Troy was thrilled to be here. And here’s how I know. For the first time in two weeks of travel, he was the first one out of bed. (Well, air mattress, in this case, but still.) 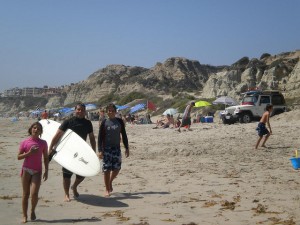 In fact, he was so eager to find a surfboard and hit the waves that he was up and gone with the van before I was out of the tent and making coffee.

And that was a problem. Because in his haste, he rode off into the sunrise with the coffee and the pot.

Now, under most circumstances, I am a patient woman. But a morning without coffee is like a day without sunshine…even in California. He also rode off with our breakfast provisions.

So in addition to a caffeine deficit, I had to try to soothe hungry children as they stumbled from their tents. Plus, a hot sun was rising over the canyons and onto our campsite, and there was not an inch of shade in site.

So I called that sucker as soon I could locate my phone and explained the gravity of the situation.

“Why don’t you come back, and we can try this again?” I suggested…very politely.

So I forgave him. I do love that guy.

After breakfast and sufficient caffeine intake, we planned the day. Troy was anxious to hit the waves at historic Trestles beach. The kids were anxious to just hang out and swim and stay as far from the car as possible.

So I suggested we take the nature path to the beach. Its only about a mile according to the internet. What could go wrong?

So the kids and I packed a few snacks, a chair and a towel or two and headed off on foot in search of the beach. It was going to be a bit far to travel with a surfboard, Troy thought, so he loaded his new best friend, Stewart, lovingly into the van and headed out by car.

I should have known I made an error when none of three folks I asked knew where the elusive path was. We did find it however, and we did walk all the way to Trestles with me cursing my husband under my breath the whole time.

Just so you know, the path is really quite nice if you like to hike…and most of us do. However, it was hot (really hot), hilly (like cliff-hilly), and we were lugging beach gear. My children tried to be cheery, really, and they kept their eyes on the horizon hoping at any moment to see the Pacific.

And eventually we did. It just wasn’t what we expected.

Trestles is a surfing beach. Really that’s all it is. There was a huge drop-off at the shoreline. The shallow water is rough and rocky, and in the distance, dozens of surfers, some in wetsuits, danced like sharks just below the horizon. Meanwhile, my children, who were exhausted and aching for fun in the sun looked around, wondering why we had driven them all the way across the country for this.

Somehow (to their great credit) they managed to suppress their disappointment when we caught up with Troy on the nearly empty beach. They knew this was something he really wanted to do, so we sat by the water, and rested up from our hike and watched the surf show for a while.

Luckily, I met a nice local lady and her son on the beach. Like us, they were watching the surfer of the family. Unlike us, they knew what they were getting into beforehand. She was very kind, pointing us to family-friendly beaches in the area. 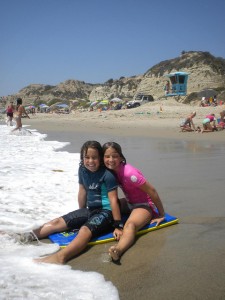 After a morning at Trestles, we hopped in the car and headed into the center of San Clemente, where we found a lovely beach near the pier. The next day, we spent most of the day at nearby San Clemente State Beach. They were both winners–a bit crowded, but guarded, sunny and absolutely swimmable. Surfable, too, mostly, just not as historic.

After spending the second day together at San Clemente State Beach, I went home to cook dinner at camp and Troy disappeared for some late afternoon surfing at Old Man’s (near the iconic Nuclear boobies).

He came back satisfied, exhausted and almost ready to bid Stewart good by.